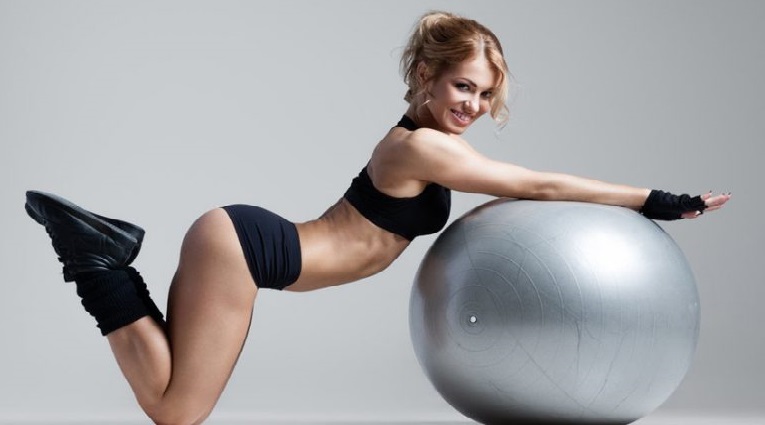 Fitball is very popular among those engaged in gyms, both in the home and in fitness centers. Today we will answer the following questions: Why did the gymnastics ball get so widespread around the world? Is Fitball for weight loss effective? How to choose a ball when buying and what should I pay attention to?

Fitball is an elastic rubber ball with a diameter of 40-95 cm, which is used in physical therapy and sports training. Fitball was first used in Switzerland (60s of the 20th century) in treatment programs for newborns and infants. Later, Fitball was integrated into the physical therapy process for the treatment of neurodevelopmental disorders. The experience of the Swiss was  adopted by North Americans and, later, other countries.

Now, the rubber ball is used not only in therapeutic approaches, but also for sporting purposes. Trainers include exercises with a Fitball in various programs: Pilates, aerobic and functional training, classes for pregnant women. The gymnastic ball became one of the most popular sports equipment right along with dumbbells and expanders. 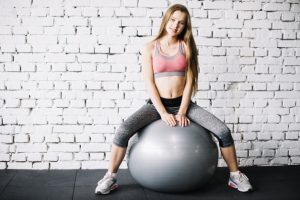 In English, the gymnastic ball has many different names, which are associated with the history of its appearance and further use. So if you are looking for a workout with a Fitball on youtube, you can search for the following terms: exercise Other ball, swiss ball, balance ball, fitness ball, a fitbm ball, gymnastic ball, physioball, pilates ball, stability ball, swedish ball, therapy ball or yoga ball.

Do not confuse a Fitball with a medical ball (Medball). A Medball is a small round ball,  weighing from 1 to 20 kg, which is often used as an alternative to dumbbells and weights.

14 Benefits of Training with a Fitball

What is the reason for such popularity of the gym ball? What is the effectiveness of the Fitball for weight loss? What other advantages does this sporting projectile have?

As you can see, the use of Fitball for weight loss and for health can not be overemphasized. Regular training with a Fitball will help you to improve the figure, improve posture, get rid of back pain, and strengthen the muscles of the back.

How to Choose a Fitball When Buying?

If you doubt the acquisition of a gym ball due to the fact that it will take up a lot of space in the apartment, then we hasten to reassure you. A deflated Fitball easily fits into a small box , and inflated with a pump for 5-10 minutes. 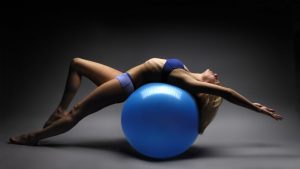 Do not worry for safety: fitball will not burst and explode if damaged, but will be deflated slowly. Not all modern balls are equipped with this function. When buying a Fitball, pay attention to the inscription ABS (Anti-Burst System), BRQ (Burst Resistant Quality), or, on the label, “System anti-break”. These indicates that the ball is protected from sudden rips.

The second point to pay attention to is the maximum possible weight that the Fitball can withstand. There are different restrictions from 100 kg and above. This is relevant not only for people with a lot of weight, but also for those who are going to engage in a ball with dumbbells and a bar. Put weight weighting when choosing a gym ball.

Types of fitball for weight loss 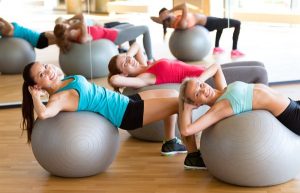 Before the first use of the fitball, it is desirable to inflate it once (approximately 70-80% of the maximum volume), hold it for several hours, completely deflate and then inflate again to the maximum volume. Pay attention because the more you inflate the ball and the denser it becomes, the more difficult it will be for you to do the exercises and the more load your body will receive. The first time, until you adapt to a new shell for yourself, you can pump it a little less than 100%

How to choose the Fitball size?

Sit on the ball, legs together, back straight. It is necessary that the knees are at an angle (90 °). If this is not so, then pay attention to the degree of inflation of the ball; it should not bend much or be excessively elastic. Try to correct this indicator, if the degree is not equal to 90, then choose another ball.

Related Post:  How to do back extensions at home and reverse hyperextensions

Fitballs come in different diameters from 45 to 95 cm. The most common sizes are 65 and 75 cm. Most often, people with medium height choose exactly these balls.

In order to ascertain the appropriate size Fitball, we recommend this test: Sit on the ball and look at the angle that formed between the shin and thighs. If the shell suits you, then the angle should be 90-100 °. In this case, the feet should be completely on the floor. If the angle between the shank and thighs is sharp, then the fitball is too small for you.

If you do not have the opportunity to try on a gym ball, then try to focus on the ratio of height and diameter of the ball:

All newcomers are afraid that the ball will simply explode under them during training. But this is not so, correctly selected equipment can easily withstand you. Those who want to play it safe need to pay attention to models marked with BQR and ABS – this is a special security system that prevents explosion in case of damage to the ball.

However, before buying, make sure to choose the correct size by conducting a simple test for the angle between the legs, which is described above. Remember that with incorrectly measured sizes, it is impossible to achieve correct posture when sitting on the Fitball, which can lead to increased strain on the joints during training.